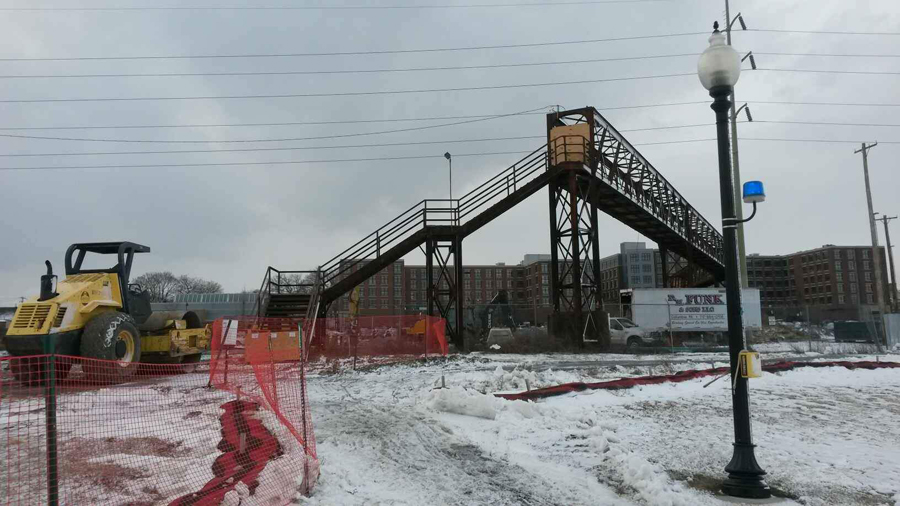 Make a Difference: Save the Armstrong Foot Bridge

Often, we do not even see them, but that doesn’t mean they are not there.

Every day, on the way to work or coffee, we pass pieces of Lancaster’s past. Landmarks, like the Armstrong foot bridge, simply fade into the background, part and parcel of the fabric of city life.

A plan floated by Franklin & Marshall College and Lancaster General Hospital would soon demolish the foot bridge that spans the recently removed rail yard.  The college and the hospital want to redevelop the property and connect Liberty Street to College Avenue. But first, the bridge has to go.

A grassroots movement is struggling to save the foot bridge and you can help.

If any of you have walked on that bridge before the college recently boarded it up, you will have marveled at how charming it is. Its walkway, some 40 feet above ground, offers an exquisite view of the city. The bridge may be old and rusted, but it is a romantic reminder a different era, when hundreds of our former neighbors walked to and from work over its span.

That bridge holds a place in my own love affair with this city. I have run across it hundreds of times.  I have spent hours with my daughters walking back and forth over the bridge, talking about life and their futures. I introduced the bridge to my partner Alaina on one of our first dates. We’d stared at the city lights and talked about our future together.

Over the last few weeks, I’ve heard many people tell similar stories about time spent with their loved ones and their memories of the bridge.

For decades, the life of Lancaster City centered on the Armstrong factory that sat on the other side of tracks on Liberty Street. If you lived in the city’s northwest you used the foot bridge every day.

The bulk of the city factory was torn down years ago, and much of the land has been turned into a park or the parking lot for Clipper Stadium.  Some of the buildings remain, but the most visible reminder of the once massive facility is the foot bridge.

In 2008, I was in the room at a reception at F&M when then Governor Ed Rendell delivered one of those huge show checks for $10 million. The state provided a grant to F&M, LGH and the Lancaster County Economic Development Company to relocate the Norfolk Southern-Dillerville rail yard and prep the land for redevelopment.  The college wanted to build more athletic fields or more buildings, and the hospital talked of moving its nursing school there. Unfortunately, LGH recently announced that the nursing school is leaving the city for the suburbs. Either way, construction plans are in the works, but F&M and LGH have been mum so far about what they plan to do with the land.

Today, bulldozers are on site preparing to remove the bridge sometime in March.

Yet, there is an effort underway to save the bridge, led by former Mayor Art Morris. Art has been handing out signs and speaking out at City Council meetings to ask F&M and LGH to slow down and look for alternatives that listen to the people of the community who are asking for an alternative to tearing down the bridge.

There was talk of moving the bridge, but that plan has since been scuttled.

At a recent City Council meeting, Sam Houser, F&M’s Vice President for Strategic Initiatives, said the college may consider a public meeting of some sort to talk about alternatives to removing the bridge. So there is a willingness to listen.

Here’s your call to action.

A recent article in the newspaper encourages people to call City Hall at 717-291-4701 or send a note to Mayor Rick Gray to ask him to speak out against the removal of the bridge. Please consider writing the mayor and ask him to step up to the mike. The most direct way to reach the mayor is through Pat Brogan, the mayor’s chief of staff at pbrogan@cityoflancasterpa.com.

The other option is to go right to the source. Write Sam Houser at sam.houser@fandm.edu I’ve known Sam for years and he’s a great guy. He’s a neighbor, and I know he cares about the city.

If enough people get up and write a short note we can save this bridge.

Here, I’ll even give you a template. Please use it, but make sure you personalize it.

[blockquote text='”Dear Sam, I am writing today to ask you to reconsider the plan to remove the Armstrong foot bridge. It is an important link to the city’s past and I’d like to see F&M and LGH incorporate it into their plans to renovate the former rail yard. Thank you for your time and thank you for saving the foot bridge.

Please remember to be polite and professional. Sam, Mayor Gray and the folks at LGH are our neighbors. We all want what is best for the city, so I encourage any discourse to be respectful.