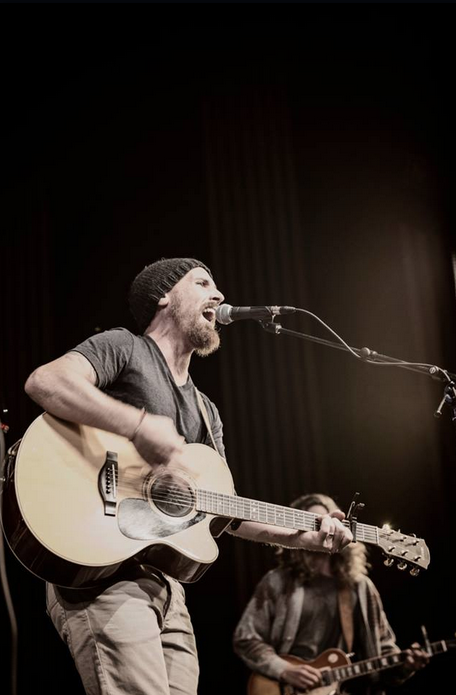 I’m an introvert.  I like to stay home a lot.  Many of my friends try to force me to leave the house and eventually I give in and have fun, but the reality is, when I’m not out playing gigs, I’d rather be home.  I love being home so much, if I have to go out, I’ll try to make it within walking distance.  In fact sometimes my wife will take the kids on a week-long adventure to visit her family, and I disappear into my music, my books, and I stop communicating with the outside world.  Strange for a guy that makes his living by playing music right?

Which brings me to this:  I went ahead and played a few shows in Lancaster, PA last spring.  I went up to play the LAUNCH music festival, and play a couple house type concerts.  I don’t play the States very often, I’m pretty focused on building my Canadian scene, but when I drove in to Lancaster, I instantly became fond of the city without having even met anyone.  The one-way streets, the old buildings, that crazy, tiny little blue house…

I had the chance to stay with a couple that were hosting one of the house shows (I love these people by the way).  They graciously put me up for the weekend, and kindly pointed me in the direction of the downtown.  And I walked.  And I walked, and walked… I was fascinated with this vibrant, living, artistic, music-friendly atmosphere, and couldn’t get enough.  How many micro breweries are there, anyway?  Oh, and coffee.  I have to admit to drinking large amounts of the blackest, most watery (how is this even possible) semi strong, flavourless brew I have just become used to drinking in the States over the years, the entire way down.  Yes, I realize I was getting coffee at gas stations, but at least in Canada we have Starbucks or Tim Hortons at most of ours.  And yes I realize Tim’s isn’t good coffee, but it is consistent… Anyway.  Lancaster has great coffee.

So between the coffee and the peanut butter chocolate stout (as good as it sounds) what else does this crazy old, little city offer?  History.  It’s OLD. Man, I read a bit about the city history and was fascinated.  Did you know it was originally called “Hickory Town”?  Did you know that Lancaster native Robert Fulton built the first, fully functional steamboat?  Now you know who the opera house was named after.  Also, Lancaster has one of the highest rates of green roof space per capita in the US.  Good job Lancaster.

So there is coffee, stout, history, and green roofs.  And music.  This city loves music.  Music is what I do, and why I came.  I’ve rarely made so many amazing connections and new friends in such a short time and in one place.  I believe in people. I really like seeing people interact, and be a part of community.  Community is, after all, of the utmost importance.  I couldn’t believe how many people seemed to know everyone.  OK, so, granted, Ken Mueller does actually know everyone, but almost everyone else I hung out with seemed to know every passing person on the street, and if they didn’t, there was always introductions and a conversation when we were stopped anywhere.  My new friend and local Lancaster musician, Matt Wheeler, seemed to know and promote every other local musician.  How cool is that?

I really like the town.  The covered market, the secret back alleys, the fact that you can walk everywhere if you want, I like that people are generally friendly.  I saw a lot of people working remotely in coffee shops, I like that too.  I liked that there was amazing food, and bacon doughnuts.  I didn’t eat one, but I like that they are there.  Ken ate one, I have proof.  I like that I have many true friends and fans there now.  I guess I just really like the place.

So this is how a Canadian-indie-songsmith-homebody can leave his country and fall in love with a city 9 hours away.  I came for the music.  I was impressed with the coffee, stout, history, and I’m coming back for the community.  See you soon.