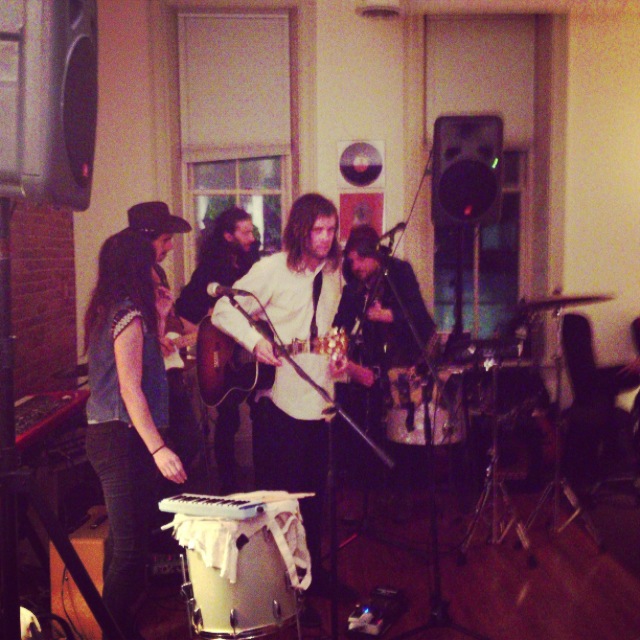 Lancaster is magical in so many ways.

After a few long days, including our first official event, I was ready to sit and read The Week, catch up on the world at large and sip some tea. However, Saturday evening had other plans for me. Around 2 PM Diane sent me a text asking if I’d like to attend a concert at a mutual acquaintance’s loft apartment. I couldn’t really argue with that.

Walking down King St. from the West End, my roommates and I pointed out new or existing businesses. Many of these I was blissfully unaware of as I zip down King via bicycle or avoid it completely when I take Orange St. Downtown. How silly I’ve been. If not just for all the incredible windows filled with realistic stuffed dogs, a new Soul Food joint, and an incredibly interesting bar that is one part dive, one part local and altogether yearning for a visit.

But those things will all have to wait.

After gathering for a delicious stout at the Taproom, we readied ourselves to walk into the unknown. I had been to house concerts before, many a times, but this was something different. A new crowd of people, of hip people. I think this as we approach the apartment, greeted with a smiling man in a hat, someone with a peculiar accent I question as Australian when we pass him by. Either way, he’s welcomed us to the party with a smile; my kind of place.

Over the next few hours, we listened  to two of the best bands I’ve heard in a long time, both out of New York, as far as I could gather. Fun and melodious, Wild Leaves provided the beat, with which, to move our feet. Earthy, hearty, flanked by tamborine and softness, it was a wonderful opening. More folk than I had been expecting, relaxing and energizing all at the same time.

In between sets, I encountered the man with the hat, to whom I asked, “But are you a real Aussie?” And with such stuper. Oh how they laughed, to which I assumed, he most certainly is. Naturally.

As we all gathered to hear the second band, I prepared myself for more of the same. But how pleasantly surprised I was. Streets of Laredo stole the show. (In fact, I left shortly afterwards as it was hard to follow up.) Such energy and passion, long hair, tight pants and sweet boots. I ate it up. So catchy, bouncy and upbeat.

It was after the first song that I realized my complete social faux paux. The drummer introduced the band, as GASP, Kiwis, New Zealanders! I was a whole country off. I couldn’t identify the accent. I was horrified, I apologized outright, to which he replied, “It happens all the time.”

The next 30 minutes or so were filled with the dizziness of dance, sometimes with friends, sometimes with the tamborine-weilding Genevieve from Wild Leaves. I was delirious with fancy for this band, this space, these people. It was so hot, I rushed outside once the Kiwis had struck their last note.

The latter part of the evening was spent chatting with the bands. Nonsensical, “You were awesome”s, story sharing of living and driving in Australia, tales of America, and the trading of information. Most traveling musicians agreed: Lancaster was an awesome place to play. Everyone is so welcoming, hip, and fun. They couldn’t wait to discover our city.

And I can’t wait to have them back for more.

NOTE: I snuck out after Streets of Laredo, as my dancin’ feet were set on taking me more places. Jake Lewis and The Clergy closed the evening as well as hosted the traveling bands. They are currently being played on WXPN and are featured in the latest issue of Fig Lancaster.