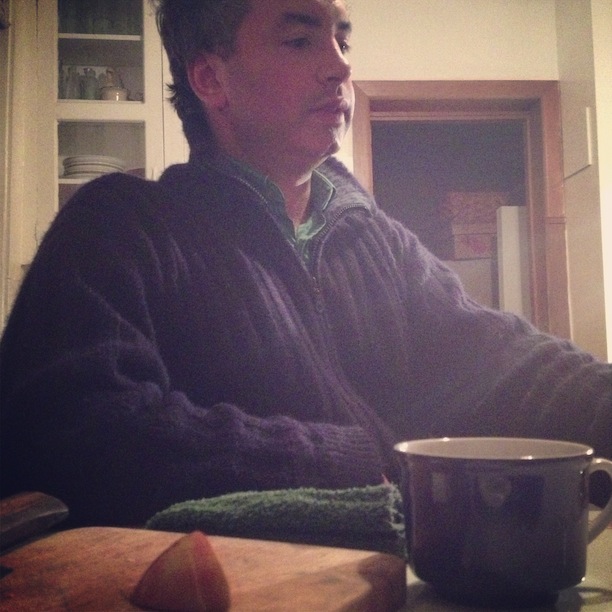 One evening, over pumpkin beer, Camembert, apple and olives, I interviewed Nick about his experiences and passions. A Transplant from Swarthmore, Pennsylvania, Nick and I had shared a town once before, and now we found ourselves in close, geographical proximity once again. As I sat across from Nick in his kitchen, I was struck with the notion that although we grew up near one another, we never crossed paths until now. I had expected to ask him about cooking, becoming a chef, hosting pop-up dinners and living in Lancaster. But, as he smoothly sliced an auburn apple, another story unfolded.

Nick was always obsessed with food, cooking and planning dinner parties from an early age and eventually hosted his first pop-up dinners in college. For his first career, Nick was a freelance product designer based in Milan, Italy, and created elaborate window displays. One, he admitted to me, featured carved and rebuilt produce lit with vibrant lighting. Wasting no time while living in Italy, Nick spent time cooking with and learning from his friends’ Italian mothers. Later, he returned to the US and settled into New York City to continue his budding career in experimental lighting and custom fixtures. Although Nick was beginning to build a reputation for his design talent, it was after a commissioned work that he realized he wanted something more, not simply to fulfill the material needs of others; the ultra rich, those solely driven by status.

After earning his Masters in Human Rights and Democratization, with a thesis on food politics, he traveled around the world working with NGOs and various organizations in NYC, Finland and London. During this time, his passion for cooking and community building melded into a delicious combination. Nick was inspired to work from the bottom up within a small community as a food entrepreneur. He aspired to become part of the community fabric, to inspire a local movement, to drop anchor and settle. While in NYC, Nick worked with Lancaster Local, Jordan Colón, and continually ate, drank, and “talked shop.” Lancaster called to him, drawn to the quality, local produce, the access to public transport, close to Philadelphia and Swarthmore, an interesting and “artistic little town.”

It’s been two years and many dinners later. Nick’s future plans involve a focus on product design, cooking and humanitarian aspects within his life. He plans to continue to work within the fields he is passionate about, and do them all right here in Lancaster.

Do yourself a favor, attend Nick’s pop-up dinner at Sunshine Art + Design.

His dinners are something to experience. Every detail is considered, from the table setting, to the ingredients, to the hospitality. Never have I felt so at home with a chef, knowing that every time I sit at his table, I will share a meal created with love, a night open to conversations and ingenuity, and a very, happy tummy.