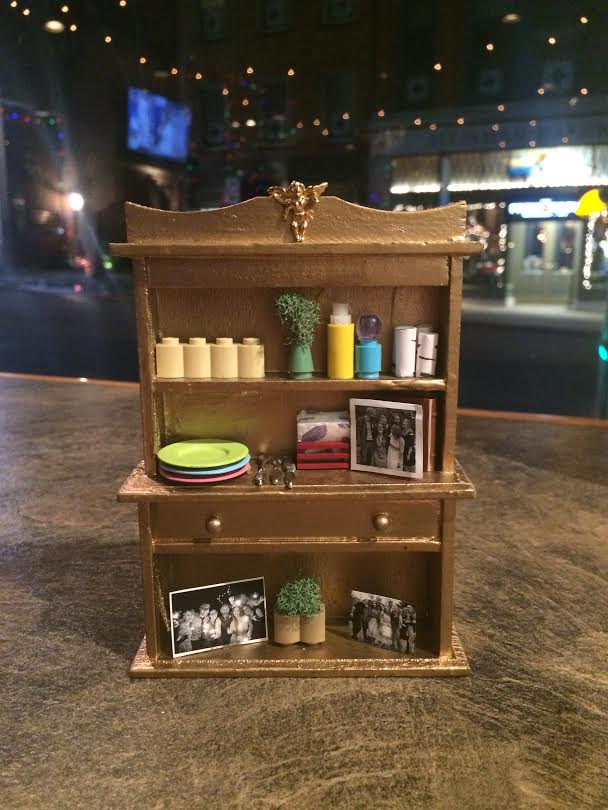 The Quiet Part of Coming Home

We decide on Thursday that we’ll actually leave Friday in order to beat the storm. Me, Erin, our dachshund Petey. I’m semi-frantic packing but stop to grab a scrap of paper. Write:

It’s really more of a list of people not to forget to see. And so incomplete. Suddenly I remember I have CDs to burn in order to survive the 17-hour drive to Lancaster. The Minnesota sky is greying hard and lowering. Cold slips through my window even though it’s closed. I’ll finish the list later.

I don’t know how many times I’ve told this lie, but I’m reminded of it every time someone asks When will you be back? A year and a half ago, when I shared the news that I was leaving for grad school, I stretched the truth. Most MFAs are two years. My program is three. But when people I loved asked How long will you be gone? I’d casually say Oh like two years. There was something—is still something—about the third year that feels so drastic and unreasonable. Like, two seemed doable, but I felt like I couldn’t tell people three and expect to come back relevant, or even remembered.

4:30 on Friday and we can smell the snow though it’s nowhere to be seen. I yank my bags out of my room and kill the light. One last check: Do I have everything? The list sits on my desk. PPL TO SEE @ HOME. If finished it would be ten times longer. But I don’t have the time. Nor would I have time to cross off every name over the next two weeks. So I close the blinds and drop it in the garbage.

I spend my trip home walking the streets of Lancaster, haunting old haunts hoping to run into people whose names were on the list or whose names I forgot to put on that list. I find Raf in the coffee shop and remember our lunches at the Upper Deck when we were undergraduates comparing punk hoodies. We hug, back-pat, promise to catch up. It is no one’s fault that we never do. After he leaves, I sit at my laptop and like a status of his on Facebook.

My Gramby is sweet, beautiful, watching football, and hectoring the puppy to stay off her nice bed. We talk about a few things that, only days later, I can’t recall at all. What I do remember is that I hadn’t seen her in six months and ran out of things to talk about in six minutes. I wanted her to ask me more about me. But I didn’t really know what to ask her about her, so.

Monday, at Modern Art, I tell Jo how I’ve been spending my time just walking around the city, visiting places where I expect the people I miss to be. What I want more than anything is to stumble across someone I forgot I even wanted to see. In six short days I’ve seen dozens of people already—given each of them the same lines about school, writing, Minnesot-nice, and the long drive—but if I try hard enough, maybe I can actually see them all. The problem is I can’t even remember who they all are. I’m drinking. I’m rambling. Sounds a bit like you’re stalking, Jo says, smiling. Nah, I laugh, but I still can’t find another word.

The storm reaches Lancaster a few days after we’re already here and settled in at the Spangler’s. I take Petey and Arlo (their new rescue) out for a walk in the snow. They pee on the same stop sign at the same time. They do it 69 style, like one dog’s stream coming dangerously close to the other dog’s face. But neither is struck with even a drop. They shake it out simultaneously. It seems planned, synchronized, rehearsed, but I know it isn’t. It is random and beautiful.

I probably deserve to be forgotten by as many people as I have forgotten already. And I have no clue how big the number is. Maybe our brains are smarter than us. “To Consciousness,” Eliot says, raising a glass in the air as everyone groans.

At Jacks in Millersville, my old college roommates narrate epic stories of someone’s cousin riding a bike down the hallway and crashing on the stoop. I can’t stop laughing. I can’t remember the moment at all. When we’re getting up to leave, I say, Wait a minute, tell me about your life now. We’ve just spent two hours bingeing nostalgia. Someone has a movie to catch. I know nothing of now. We don’t have time. The waitress tells us to have good nights.

Because I’m impatient and it sticks, I slam the back door closed. The clock falls off the wall and its glass face shatters. I text my friends: I AM A TERRIBLE HOUSEGUEST.

I’m feeling so melodramatic. Maybe it’s because I’m writing this a day away from leaving. The sky has gotten slate and low again. I’m making plans for drinks again. I’m so fucking out of money it’s stupid. The last twelve days in Lancaster were filled with beautiful moments—talking fiction in the recesses of the seminary; listening to a mentor’s story of a dream finally coming true; Zoltar’s advice and the atmosphere of certain bars; yelling for the love of a ten-person word game—but I still get hung up on the absences. I only just remembered this morning that I wanted to see Bruce. I didn’t get to central market. I don’t recognize Mulberry street. My toes are so cold everywhere I go. I can’t even remember everything I’m missing. Maybe memory does that to help us cope. It erases things when we aren’t looking. To help us stay organized and focused? To help us feel lighter? But I feel really, really heavy. Mostly I am so grateful it’s gross—I promise. It’s just that I’m less interested in the feelings of exuberance I have always associated with my home. Moreso, I’m hung up on the question of whether my memory tries to make it easier on me by forgetting things, memories, whole people. All I want at this point is to thank everyone for still being here. But then it comes into my head again: who will I forget to thank?

On the last night of my stay, I wake up hungover at 5:30 am. I check my phone. An email from Leah, my friend who spent the last two years in Zambia. I just wanted to say I’m proud of you… so happy to call you a friend. All at once, I feel a simultaneous longing to see her and an intense guilt at having completely forgotten she was home this whole time.

We climb up the snowy steps to the church parking lot because the dogs must investigate a dumpster. They OK it. As we leave the lot, the dogs decide to tackle the steep embankment back down to the sidewalk. I’m powerless to stop their pulling. I just let them lead. I plant my feet. In this way, we sort of ski down the slushy hill. The sliding sounds like a big voice going Shush. These are the three wildest seconds I’ve had alone in the city this trip. When we reach the sidewalk, I cheer, Boys, let’s do that again! But Arlo, now thoroughly cold, demands to go East, towards home; and Petey, seeking some other journey yanks with all of his little muscles west. I stand in the middle and let them pull. Eventually I am going to have to fall over.

Someone dings a fork on their glass, perhaps by accident. The ten-person high-top goes quiet. Someone should give a speech. I laugh. Speech. I steal a friend’s French fry and sip my pricey beer. Speech. I would love to know what to say here.