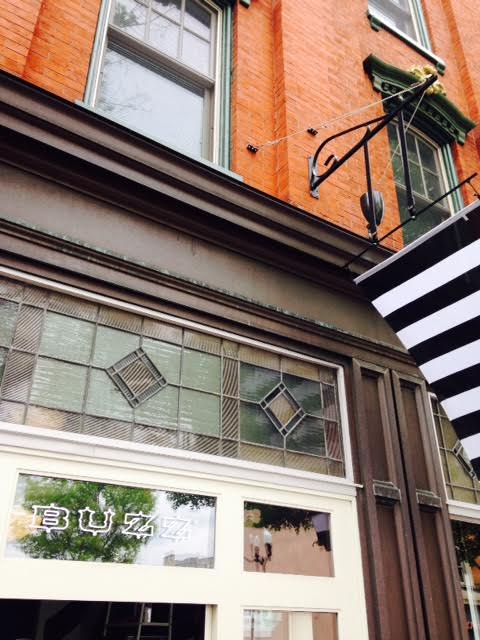 Let’s Get Down to Business

Quick question: What do a revolutionary minister and a first-generation Italian-American have in common?

Answer: They are the reason I opened a restaurant. No, seriously.

When I was young, I was given an assignment to do a report on one of several popular historical figures. Choosing Martin Luther King, Jr., I was affected by the idea of consistently working hard for the type of community — and to a larger degree, world — in which you would to live. I learned a lot about the challenges people faced during the Civil Rights struggles in the middle of the 20th century. And though I grew up a mostly-middle-class white kid, I definitely applied that kind of ethic — that kind of fairness and humility — to my own life. I read MLK’s “I have a dream” speech long before many of my classmates, and was permanently inspired. (I write this as an adult who has visited the MLK Memorial, as well as the spot at the Lincoln Memorial where he gave that speech, on numerous occasions. It never ceases to make my heart rate soar.)

In addition, I was partially raised by a man who taught me to keep my life simple. I can distinctly remember my grandfather, Harry “Buzz” Brunory, being the kind of professional that brought true joy to his work every single day. I’m sure he had his share of trying days…days when he felt like giving his boss, or his boss’s boss, or his boss’s boss’s boss the finger. But when I think about the overall lesson he taught me, it was to choose to do what makes you happy. Choose what makes you feel like you’re fulfilling your purpose. Choose, no matter what people think of it, something that you can point to and say, “That is me. My work and I are connected in a way that my life is intrinsically connected to the purpose of my being.”

Okay, maybe I didn’t see it in such philosophical terms at 12. But both of these men had an approach to his job, to his life, to the way work fit into his life that left an impression on me.

Those of you who know me probably know me either through my work with Transplant or through one of the events around town at which I perform. I’m really grateful that I’ve had those two “ins” into this town’s culture. But now I’m finding that being part of the community in these ways has been a crucial part of being successful in the very early stages of my sidewalk-cafe-to-go-restaurant-slash-rock-and-roll-circus.

I must admit…my story is completely dependent on my good friends at Aussie & The Fox. I worked for them for nearly two years before starting BUZZ, Lancaster’s brick-and-mortar street food shop. Because I was already familiar with so many pieces of the business and the way that A&F operates, my to-do list was simplified. And, all the permits and legalities were already in effect from their shop “The Tucker Box”.

In addition, I had known for several years that I wanted to open some sort of cafe, so I had the bones of a business plan built already. (If you are starting a business without a solid business plan, shame on you! I was a skeptical dreamer too, but it really is necessary).

Though there was some work done for me, there was still a LOT of work to be done. Remodeling, pre-opening inventory lists, marketing decisions, menu development, etc. consumed the majority of my time for the first two months. So much, in fact, that this Chief Adventurer has done very little adventuring (sorry, team!)

The key component of having a successful downtown business here, though, is creating the thing that the community needs. I’m not shy about the fact that I think I’m pretty good at talking to people and making a sandwich. But that’s not enough. What you need to be good at in Lancaster is offering a true Lancaster experience from start to finish. Perhaps not surprisingly, the area’s tradition of “a simple life” influenced it a lot. So here are a few simple rules I’d follow if you were going to start a business in Lancaster:
1. Value people first. There’s a lot of research that proves successful businesses value their employees and customers as people (versus as means to an end). But it doesn’t take a researcher to understand that putting people first builds the kind of foundation a small business needs.

2. Be proud of your product. I don’t care if you’re a dog groomer or a carpenter or a vintage lamp shop owner. People in this town recognize that doing something well is directly related to the pride with which you do it. It’s part of our culture, this appreciation of true craft. So don’t serve anything you aren’t proud of.

3. Say, “Yes.” And say it a lot. You probably have a vision of what your business looks like on a successful day. And maybe you have some limits in mind regarding how your shop/gallery/etc. will fit in. You can’t trash them all. So you’ll have to occasionally say, “No…I’m sorry, we don’t ___”. But in general, you should plan to operate your business with the flexibility of someone for whom every cent counts. So be a people pleaser. Accommodate the majority of customer requests and stick to your boundaries only when you feel like it’s going to create a precedent that isn’t sustainable for you.

4. Give back. Perhaps I’m a softy (okay, I’m DEFINITELY a softy), but we all do better when we all do better. As I see it, my work with Transplant to make the community better overlaps with my work at BUZZ. Yes, the latter is my personal business and I would like to make money doing it. But by being generous when the budget allows, I sincerely believe you are going to do better than if you didn’t. It’s not always easy to be unselfish, but it’s does usually pay off in the long run.

5. Be adaptable. Okay, this one isn’t so much tied to opening a small business in Lancaster, but is crucial no matter where you are. And, maybe, it’s the most important. You have to adjust to all kinds of factors all the time. A refusal to change is a refusal to grow. And growth is exactly what you need.

I hope these tips are helpful. If you’re still dying for more info, there are more resources than I can name online. And, of course, you’re welcome to come by for a coffee and a sandwich and we can talk in person! (Yes, that’s a not-so-subtle plug.)