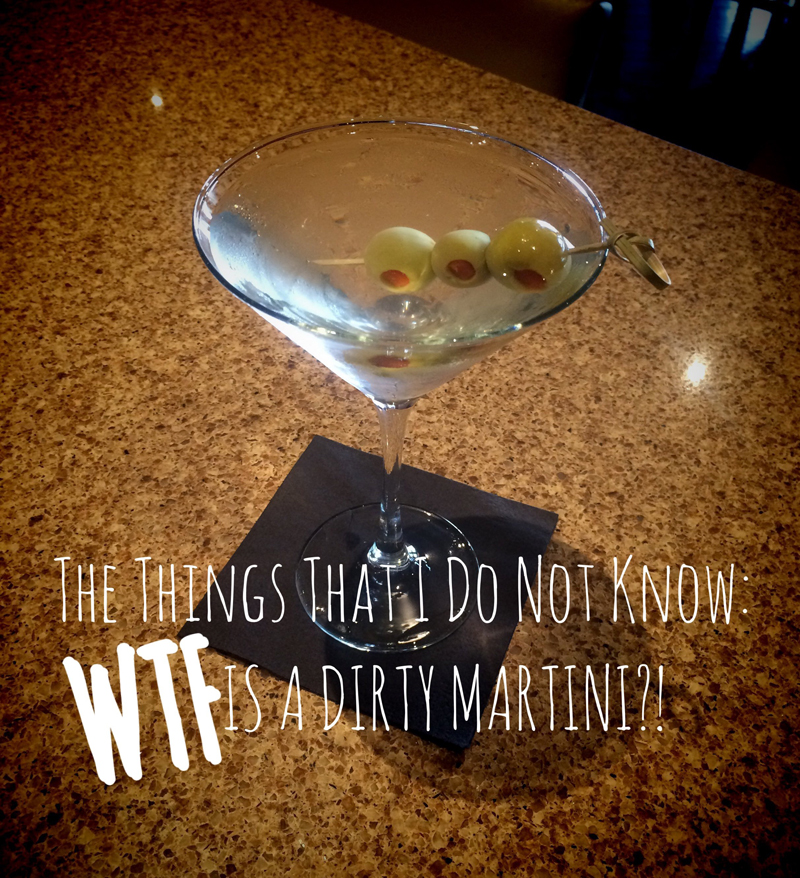 The Things That I Do Not Know: WTF is a “Dirty Martini”?!

In 2010, I had the good fortune to become a full-time barista at a popular restaurant in the city where I lived. I’d had several years of training in coffee (and to a lesser extent in tea,) but this restaurant was unique. Our bar was the first I’d worked in where I not only served espresso, but also alcohol.

Those of you who have gotten to know me in person have no doubt put together that I know my way around a pint of ale. So my new duties weren’t all that challenging when it came to pouring the twelve tap craft beers we offered.

And, I was fortunate to work with some pretty knowledgeable wine drinkers who could assist me in talking to customers about our lineup of wines as well. (I remain woefully under-informed on vino, and am considering a future blog on the topic.  I wonder if I can find any wine drinkers to help…hmmm.)

But the really great thing about this job was that we served a handful of house cocktails and that’s it!  There were no Jack and Cokes, no Rum Runners, no Margaritas. Only the six or seven infusions that we’d make behind the bar were served, and people liked it. It made my job pretty easy, too. Knowing a few proprietary recipes was a piece of cake.

But under the ease of the job, behind the facade of being (in the opinion of others) a good bartender, there always lied an insecurity. For, if someone had come in and asked me to make them a Manhattan, an Old Fashioned, or a Martini, the truth is I’d have to tell them, “I don’t know how.”

Recently, I was once again presented with a chance to become a bartender (something I love doing, and that I think I can be great at.)  But the lack of experience in making your standard classics once again reared its ugly head. In this case, however, I’m lucky enough to work for some pretty great people who see that I’ve got the capability if given the training.

And so, after a long introduction, I present to you Episode One of The Things That I Do Not Know: WTF is a “Dirty Martini”?!

I chose this drink among all the classics for two reasons.

First, the sentimental: A girl I once had a major crush on loved a good dirty martini, and she told me she could never be with anyone who didn’t drink them, breaking my heart at the time. As I loathe olives, I realize now that we were probably destined to never live happily ever after anyway.

But the second reason is this: I honestly know next-to-nothing about a Martini. I have heard that they can feature vodka or gin, right?  They come in that cool glass, and maybe there’s vermouth?  What’s vermouth?!  Do you have to dance like that when you shake it?

Kyle set me straight. First and foremost, a true martini is made with gin and vermouth. To make a “Vodka Martini” is really to make something called a “Kangaroo Cocktail” (true story, I swear). However, no one has the nerve to say that aloud at a respectable volume, apparently. So the “Vodka Martini” was born.

Here, Kyle is going to school me in the art of making a proper historical Martini, though how the drink was invented is up for debate. Originally, the Martini was said to feature London dry gin and non-dry (not white) vermouth. So I’ll stick with that.  These two main ingredients are combined and chilled in a 6:1 ratio (or to taste). Then, you add olive brine to equal the vermouth.  This is what makes the Martini “Dirty”.

First, though, I must chill the glass. This ensures that the cocktail won’t be warmed by the ambient temperature of the room.  It’s science.

According to Kyle, the stirred martini is the original. I’m going to choose to make a shaken martini, however, because I’ve always wanted to use the Jurassic Five line “I got moves like Tom Cruise in cocktail.”

I fill the shaker with ice and go to town.  My arms are pumping, my hips are shaking, my beer belly is jiggling.  After the mayhem ceases, I dump the glass of ice water and strain the liquid from the shaker into the cold glass, keeping the ice at bay. I can already smell the olive and my face wrinkles.

Thinking of the girl who inspired the making of this drink, I garnish it with three olives on a cocktail skewer: one for her, one for me, and one for what was never meant to be.

I sip. Hm. I sip again. I can taste the juniper and get the dry notes, for sure.  At first, it’s not so bad.  Perhaps I could even become a martini drinker!  But in the end, there’s that olive flavor.

I pitch the remainder of the drink into the trash bucket and wash my hands.

Turns out, making a dirty martini is pretty simple. It was hardly worthy of being something about which I was afraid to admit ignorance.

Cracking open a beer, I take a fairly large slug to right my palate and think.  One thing I do not know down — countless more to go!  What’s next?