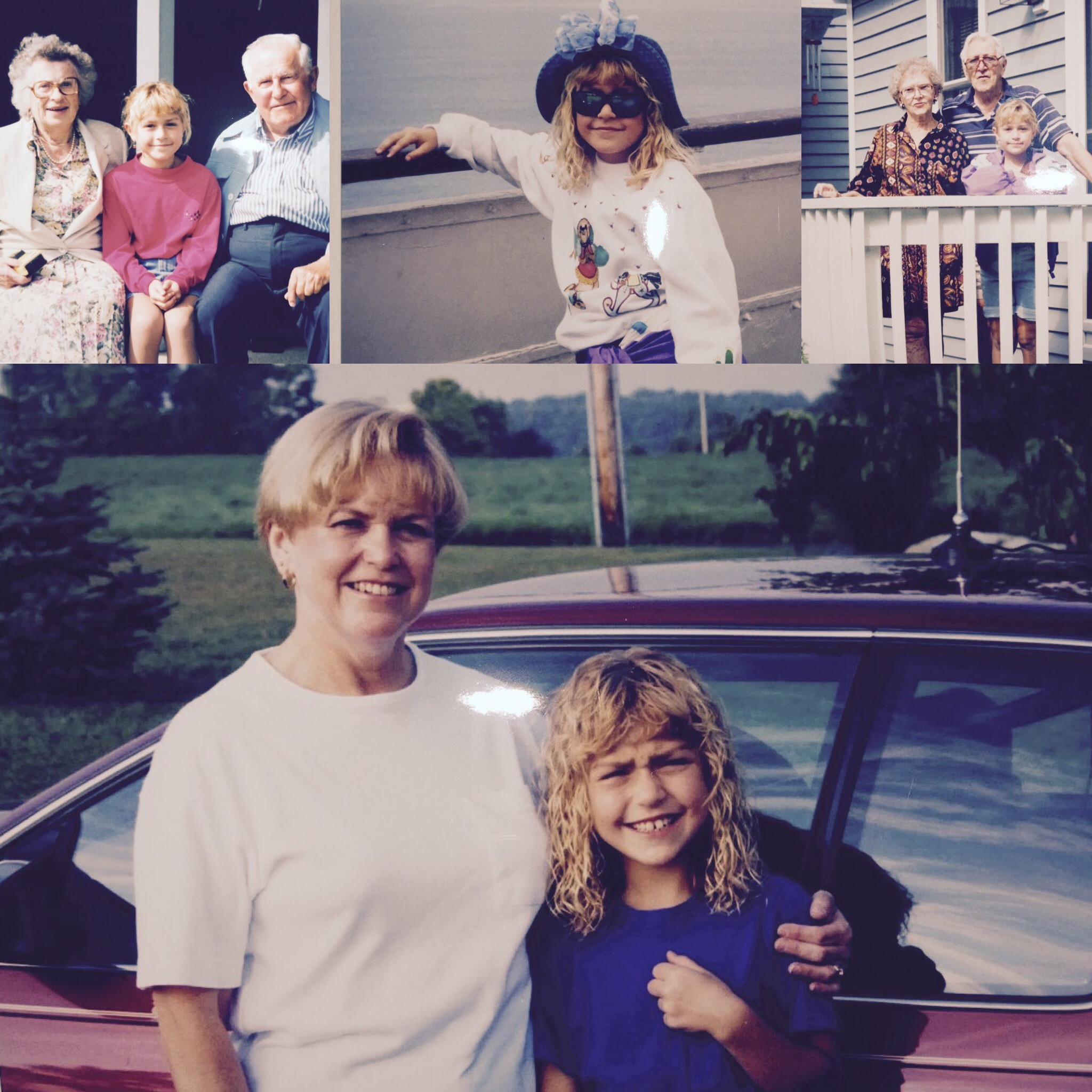 My grandma taught me The Love of the Open Road when I was 9, in August of 1993.  Grandma has always been a thrill-seeker, a high roller, a world traveler, and she has shared the gift of Wanderlust with all of us over the years.  Because I am her favorite (hey, I can’t help that I was the first grandbaby which entitles me to a certain status and innumerable privileges that are only bestowed upon the eldest and most adorable child), I got to be her co-pilot for my first Big Adventure which took us to the far off land of No-va Scot-tia.

We headed north, our maps marked with our journey from Pennsylvania to Maine, then across the bay by ferry to oh, Canada.  We stopped in Watertown, Massachusetts first, to spend time with Grandma’s brother and his family.  I remember a picnic, dips and fruit trays and tall people buzzing around the kitchen. Was it to celebrate a cousin’s graduation? Or Uncle Stephen and Aunt Marge’s anniversary, maybe? Despite my shyness, being around unfamiliar faces in a house far away from home, I felt comforted by a kind of brash warmth that I now know is unique to sah-castic and hilarious Massachussettians.  My favorite part of visiting Grandma’s family was seeing her in natural habitat, so to speak, her accent especially drawn out after a few cocktails, the laughs bigger and louder, words chewed on, jaws stretching A’s for days.

We left the next day and continued to Bah Hah-bah (read: Bar Harbor) and some very exciting “first times.” We checked into the hotel where I apparently insisted on swimming in the pool even though it was frickin freezing.  We went to a seafood restaurant on the bay and sat outside, the air smelling of salt and fish, seagulls chanting robustly for leftovers.  And then, I experienced My First Lobster! Or okay well Grandma tried to get me to order one of those giant terrifying sea spiders which I refused to do, even though this was like one of those “when in Rome” situations but I was seven and they were scary so whatever, Grandma! I think I ordered shrimp, the Lobster’s less intimidating cousin, and eventually tasted Grandma’s lobster, god love her for insisting because I remember being pleasantly surprised.

The next morning, another first—a ferry ride to a whole. Other. Country!  We embarked on a ferry across the Bay of Fundy, which had a restaurant and a tv lounge which made me feel fabulous.  We stood on the deck, watching dolphins in our wake.  Did I see killer whales, too? The experience was mystical; a boat-ride to the Great Unknown, my amazing Grandma as my guide, an unexplored territory growing larger and larger in the distance.  We were en route to visit Grandma’s Aunt Anita and Uncle Wendell, who lived on the beach in Nova Scotia.

When we arrived on the shore, Uncle Wendell and Aunt Ahhh-niii-taaaah, (who would, as it turned out, school me in the manners I lacked as a young lady), welcomed us to their tiny house, nestled among the dunes and tall grasses.  The first night, we ate something that, in my mind, absolutely required ketchup, and Aunt Ahhh-niii-taaaah begrudgingly delivered it to me, the stark red sauce intimidating against the backdrop of her fine white linen tablecloth.  A bundle of nerves about keeping me in her Aunt’s good graces, Grandma mouthed, “DOOO NOT SPIIILL IIIT” to me, and immediately proceeded to nervously spill her black coffee all over the table.  Comic relief you say? Oh hell no, but Grandma’s faux pas did make me feel a little less awkward, puffy-painted sweatshirt and all.  The next day, I stuck my finger out to point at something and Ant Ahhh-niii-taaaah gasped, reminding me that pointing is rude and instead we should always ges-tuuuuure towards the thing we want. I was mortified, and concerned that I had quite possibly been going about my entire life wrong up until this point.

But really, what I remember most clearly about this trip was the way the Aunt Anita and Uncle Wendell’s neighbor’s shiny black lab looked running through the warm muted colors of the marsh, the golden grasses for miles, the gray ocean marking the horizon line, and Uncle Wendell’s wooden work shed.  His quiet kindness seemed to me a reflection of building a life in a peaceful place, such as this.

We stayed for two nights, and after Goodwill thrifting and Chinese food for dinner before our departure, we shared hugs and faretheewells.  After about 10 minutes, Grandma and I lounging on the ferry, she made a grand ges-tuuuuuuure towards the tv and we must have laughed for an hour. Uproarious, unstoppable laughter, laughter like a secret shared just between us.  My inadequacies were obliterated with our laughter, in the light of Aunt Anita’s idiosyncrasies.  When back on dry land, we got our car and unfolded our maps, heading back south and towards home.  We stopped halfway in Abbington, Massachusetts, to visit great-grandma and great-grandpa for a night. Great-Grandma had a raspy voice and a strong will, and Great-Grandpa was stoic until he made a brilliant wise-crack, surprising me with his twinkling smile.  We paid a visit to Grandma’s sister Aunt Ginny and brother-in-law Uncle Eddie, too, until it was time to go.

Grandma said, when we neared my hometown, that I began shouting exclamations like “There’s the store where we go grocery shopping!” and “There’s where mom gets gas!” and “There’s my street!” After my first two weeks away from home, I must have thought I might never see these blessed familiarities again. It’s funny though, that I don’t actually remember that particular feeling. Recollecting this Big Adventure reminds me only of a blissful independence, and the ecstatic joy and fear of experiencing things I had never before even dreamed up.