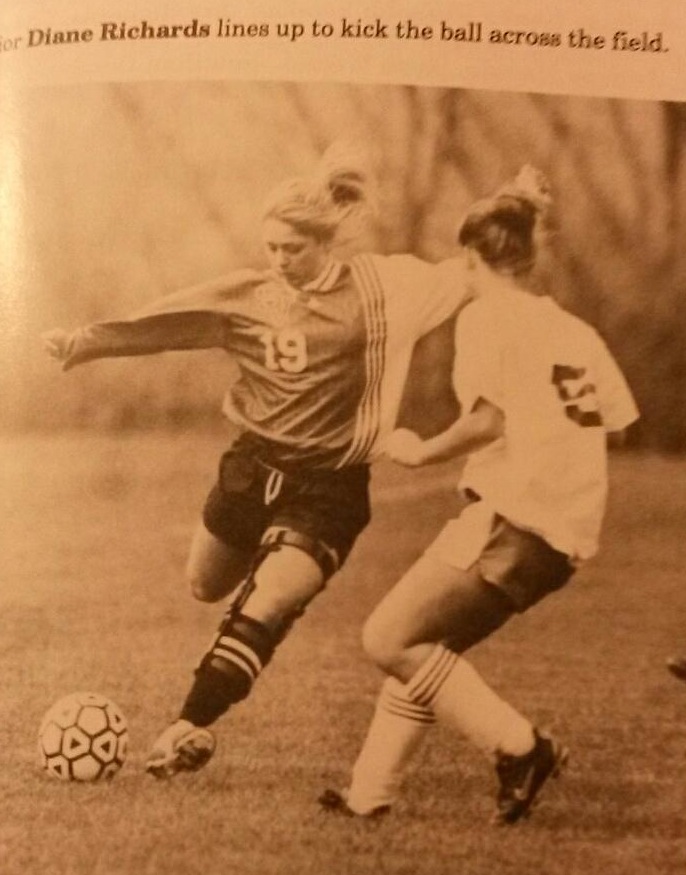 That’s right, I said it: I’ma tell you about my first[and only]fist fight. This true story does possibly incriminate me after years of getting away with a night of mischief oh-so-many years ago (or did I? Either way, sorry Mom). But, if it ups my street cred, I’m totally willing to bare all.

When I was sixteen or so, I was quite the little goody-two shoes; I was student council officer, co-captain of my Varsity soccer team, an Honors student, in the school chorus, in school plays, blah-blah-brown-noser-blah.  And then there was the rebel in me– the girl that could hang with all the boys and drink Natty Ice (again, sorry Mom) and belch the loudest, the girl who pierced her own belly button with nothin’ but an ice cube and a safety pin, the girl who stole other girls’ boyfriends. Whoops.

One fateful night these two conflicted identities came face to face in a battle of wills and, alas, sacrifices were made, and the boy-crazy, freedom-seeking teen won out.  Every year, the Student Council participated in the Relay for Life event, getting sponsored to walk or run around our high school track into the wee hours of the night. The whole community came out for the event, setting up tents around the high school campus to settle into the long night ahead. I think that was the year that I sang Elton John’s “Candle in the Wind” for the opening ceremony. That’s right, y’all, I was INVESTED. Well, until he showed up.

He was a wrestler and the wrestlers were my beer-drinking-cigar-smoking but mostly gentlemanly crew. I loved being an honorary dude, laughing hysterically at their wildly inappropriate humor, batting my lashes at their harmless flirtations and then chastising them when they sounded like macho pigs, posturing for some nearby hotties. That night, I couldn’t wait for them (read: him) to show up, those baby blues making me swoon, our easy way of being together having me weak in the knees. As long as his girlfriend didn’t see. Ouch.

So we flirted until she was around. And then, after hours of intermittent running and socializing, the boys asked me if I wanted to get the F outta there… go on an adventure which led to cheap beer and backyard shenanigans. OF COURSE I DID. Obviously. So I made my great escape, me and the dudes, and after an obscenely long walk we arrived at our destination, a back porch, losta bad jokes and a little bit mildly illegal activity.

And then, suddenly, it was bedtime. A decision had to be made– the only real decision of my angsty-teenage-life:  WHERE DO I SLEEP? Or rather, with whom do I spoon?

And, of course, neither of us could resist playing with fire, we’d been tip-toeing around this moment all night, so we tentatively crawled into a spare bed (fully-clothed I might add, cuz I am a LADY) and he was the big spoon, the only spoon, the perfect spoon. We played footsy until we fell asleep, and there was something so profoundly intimate about snuggling our feet in warm socks, the boundaries of a simple friendship totally crossed.

And then it was morning and I had to get the hellouttathere before my mom and everyone else–eh-hem– his LADY found out about our canoodling all night. When we arrived back at the track I played it cool, or so I thought.

I grabbed a couple of girlfriends to safely escort me to the bathrooms when I saw her approaching. She greeted us, flanked by two other girls; it was a potential sharks and jets situation but alas, no snapping or singing ensued, just a painful silence. She said, “her,” calmly– “where were you last night?” and before I could answer (I remember her nervously biting her lip)…

My very very very sweet friends gasped in horror but I was alright, my abs of steel deflected her vicious attack. And then, just like that, she casually walked away, leaving me flabbergasted and my ego in check. No, I didn’t return the favor.

After all, I’m a pacifist.